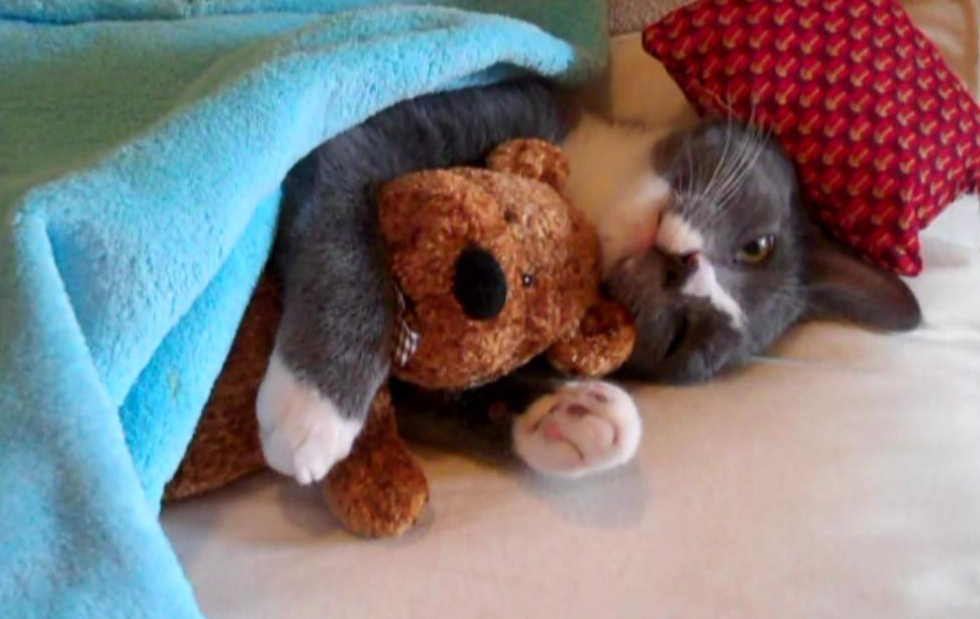 My story of Meesha starts with my previous cat, Salem.

In July we lost our family cat Salem. Salem was a black long hair fluffy kitty with great big green eyes. He was named after the cat on the tv show "Sabrina the Teenage Witch." He was our world. He hated to be alone and followed us everywhere around the house. He always wanted to be in the middle of everything we did and we loved it. Salem was mostly an indoor cat but liked to go to the bathroom outside. So we would let him out to potty and then he would come right back in. He didn't like to be away from us for very long and he hated to be alone. He was extremely loving and gentle. We thought he would be with us forever.

One day when we let him out he didn't come back in. He just completely disappeared. There were reports of a coyote in the neighborhood and a neighbors cat also went missing about the same time. We were heart broken and devasted. The loss we felt was so great I can't put it into words. The house felt empty and we just couldn't believe that our sweet cat could be gone. We had the whole neighborhood looking for our cat and unfortunately,we never found him.

In September we thought we should get another cat. This time we wanted a kitten. We found a place that was adopting out kittens nearby and they had a huge selection to choose from. I decided to go over one day when the kids were in school. I had my heart set on finding a little black long haired kitten that would remind me of Salem.

The place had maybe 30-40 cats and most of them kittens that had been abandoned or dropped off by previous owners. There was even a litter of long haired black kittens. The lady who ran the place told me I could make myself at home and take my time picking out my pet.  I sat down in the middle of the floor and started playing with them. Talk about cuteness overload!

Out of nowhere this little gray kitten jumped up on my lap and curled into a ball. I thought he was sweet and started petting him while reaching to pick up a black kitty. Another fluffy white and beige kitten came over to sit on my lap too. The gray kitten clawed at her and tried to bite her. She fell off my lap and sat next to me looking up at me with big blue eyes. I picked the gray kitty up off of my lap to let him know that wasn't nice and picked up the little fluffy.

Meesha just after I brought him home.

But the kitten climbed right back up. I smiled and told him he was a cute kitty, put him down again and stood up. I walked over to a group of sleeping kittens. But the little gray kitten persisted. He jumped onto my leg and started climbing up my pants. I picked him up and sat him on a bench. He jumped from the bench as I was walking away and started climbing up my shirt.

This went on for a while before I finally resigned to the fact that I would have to carry him around if I was going to look at any of the other kittens. The kitten was completely content in my arms. He even let me cradle him like a baby. He just wanted me to carry him. And his purr is loud! So I knew he was content.

I tried a few more times to sit with the other kittens and cats while holding him. Everytime I gave another cat attention this little gray kitten would turn into a ninja attack kitty fighting off any kitten or cat that would even dare to come over for attention or sit in my lap. He didn't care how big they were either. A cat that must have weighed around 20 lbs came over for affection and Meesha bit him on the back!

The lady asked me what kind of cat I was looking for. I said "A black fluffy one. But I think this one just adopted me." That's how I  became Meesha's pet.

The lady at the kitty shelter also told me the story of my new kitten. Meesha was found swimming in a local lake where someone had abandoned a litter of kittens. His siblings did not survive. A woman rescued him and brought him to this shelter where they took care of him until he could find a new home.

So, that's the story of how Meesha chose me one day at a kitty shelter.. And he is the sweetest most gentle cat ever! He loves to cuddle and be held. But he's also extremely intelligent and active. And this kitty never ever goes outside unless he's in his carrier or in my arms and on his kitty leash.

Meesha has been seen on: